Suzuki has a well-deserved reputation for providing small four wheel drives that punch well above their weight. For buyers in the second hand market looking for a cheap four wheel drive to get them out there you can’t go past a Sierra or Jimny. But which one is better? Really each have their pros and cons and it comes down to what you intend to use the car for. Jimny’s have a little more comfort and power than the older Sierra’s, although Sierra’s have a proven reputation for being more capable off-road. Plus Sierra’s are more easily customised for those who want to modify their car into an off-road weapon. This article takes a look at the main factors when choosing between a Sierra vs Jimny, so you can choose the car that is right for you. 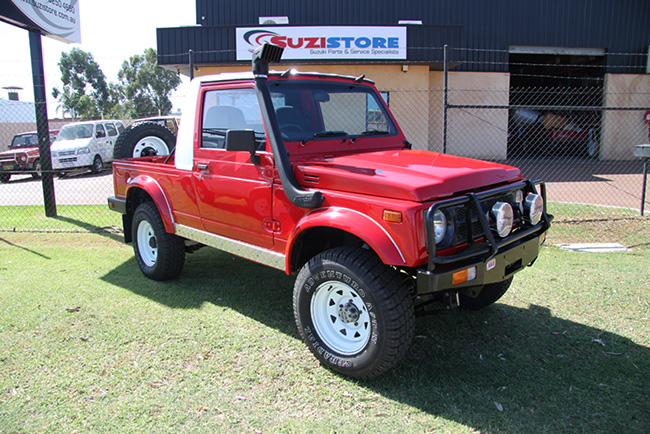 With Sierra and Jimny you get a simple no fuss small SUV, but what they lack in glamour they make up for in fun. Light, high riding, full-ladder chassis, a dual-range transfer case and live axles front and rear make the Jimny and Sierra perfect little off-road machines. Sure, they might not be the most comfortable or powerful car to drive on the road, but you get a lot of 4WD fun packed into a tidy little package. Reliable on the beach and down most dirt tracks, you can take a Jimny or Sierra most places you can take much larger 4WD’s, often further due to their light weight, short wheelbase and narrow track width; as they don’t need to drive in the ruts left by the larger vehicles. They lack space for cargo, are pretty slow up a long hill and aren’t the most comfortable car, but with Jimny and Sierra that’s not what you’re buying, you’re simply buying pure off-road driving fun.

For years Sierra owned the small 4WD market due to its off-road capabilities and for good reason. Low range capability, four wheel drive and light weight made the Sierra an excellent off-road car. Sierra's come in 8 Valve 1.0-litre or 1.3-litre carburetted engines. They certainly arent going to be breaking any land speed records. But when it comes to off-road, Sierra’s are often favoured over Jimny’s for two reasons: they are easy to modify, and they are stronger vehicles. When Suzuki made the Sierra, they were designed purely as an off-road car for fun. Jimny's are more of a soft 4WD and made for improved comfort on road with some off-road capability. Suzuki sacrificed strength in their transfer case, a weaker gear box and axles for comfort in the Jimny with its coil suspension, longer and wider track and heavier overall weight. The second reason four wheel drive enthusiasts’ love the Sierra is its ability to be modified. The simple design and engineering makes it the perfect platform for 4WD modification. When Jimny was released, modern additions such as coil springs, airbags and fuel injection made it harder for the home mechanic to modify the car. Aftermarket support was also once quite limited for the Jimny (though this is no longer the case). Being easily modified is a big tick for the Sierra allowing for the easy addition of basic 4WD extras such as off-road tyres and bull bars.

When it comes to off-road capabilities, the Jimny holds on to Sierra’s long legacy with a separate steel chassis, dual range transfer case, rigid axle’s, small packaging and plenty of ground clearance making it still modestly capable. Where Jimny really stands above Sierra is in its reliability. Vastly improved by fuel injection versus carburetion. Jimny’s are also newer, and therefore suffer less issues associated with the age of the vehicle and parts at the end of their life cycle. Jimny’s also saw an improvement in power with 8 more valves boosting output to 59KW at 6000 RPM. This addition made for a welcome bit of power driving around town. 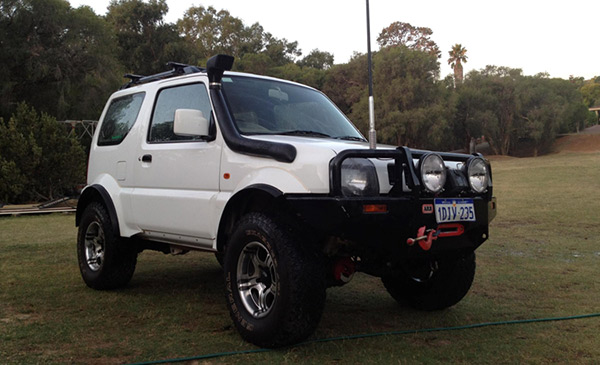 It’s fair to say comfort wasn’t the most important factor on the designer’s minds when Suzuki developed the Sierra. The poor riding leaf-sprung versions aren’t helped by thinly padded, vinyl-covered seats. After market suspension for the Sierra can help soften the ride, but there is a limit to what can be done. Jimny’s release in 1998 saw an improvement in comfort. Coil sprung, hard top, air conditioned, improved interiors and wider wheel base all contribute to a more comfortable and secure ride. Plus the addition of airbags and side intrusion bars give it a significant edge in the safety department (though we don’t recommend testing it out). If you’re looking for a weekend car to take on bush tracks you’ll be happy with the Sierra. But if you plan on using your car for longer commutes and road trips, you’re better off with the Jimny – depending on how far you wish to modify either one as well of course.

Sierra’s are older cars and with that age comes a few problems. Sierra’s have always been a favourite car to take on the beach, so they can be susceptible to rust. It pays to have a close inspection of the panels before purchase, particularly around the windscreen frame and under the plastic sill covers. A lot of Sierra’s were sold as soft tops and years of exposure to the sun and elements means finding one with interior and seats in good condition is nearly impossible. The older age also comes with potential mechanical problems, (best to take it to an expert Suzuki mechanic for a check over before purchase). Jimny’s are newer cars but keep in mind the older models will have the same problems and are now nearly two decades old, though Jimny’s have a slightly less ‘hardcore’ market, so they have generally seen less time off-road and are better cared for than the older Sierra. When it comes to aftermarket parts both models are relatively easy to get parts for due to the availability of suppliers such as 4WD Part Shop.

As Sierra’s get older, finding one in decent condition is getting exponentially harder. There are still a few on the market though, and you can pick up a 90’s era Sierra for between $4000 and $7000 AUD on the likes of GumTree. They are a car with a bit of a cult following so you can find a lot of cars that have been modified for more extreme off-road use. Be careful that any modifications done have not jeopardised the safety, legality or performance of the car. Interestingly, Sierra’s are getting so rare you may end up finding you pay more for a 90s era Sierra than an early 2000s Jimny. This is because Sierra’s that are not modified poorly or are rust-free are becoming as rare as hens teeth. Getting your hands on a good Sierra may even see it rise in price over time as long as you keep it in good condition, while Jimny’s have not quite developed that same rarity or following just yet, Suzuki are still producing Jimny's, recently announcing a new model for 2018/19 with the same underpinnings, so the future looks bright for Jimny.

What Car is Right for You? 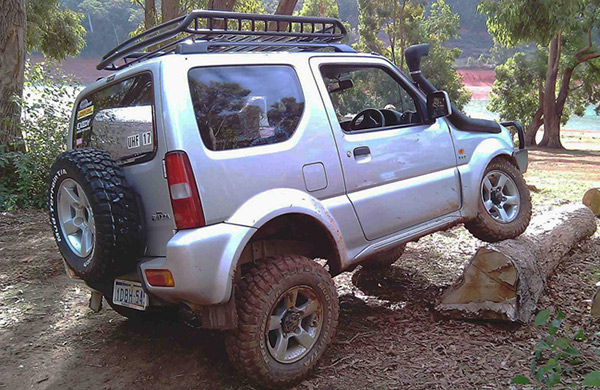 At the end of the day, it comes down to what car is right for you. You probably already know if you’re going to buy a Sierra. Sierra's are suited for the Suzuki 4WD enthusiast who wants to do a bit of modification work and doesn’t mind getting his or her hands dirty. They are great little off-road cars, built strong for off-road use and easily modified due to their simple layout. But you’re sacrificing a little comfort and safety for that raw off-road appeal. If you’re looking to get into the off-road market, but plan on using your car as a daily driver, you want to go with a Jimny. Air conditioned, water tight and superior ride comfort goes along way when you’re driving any sort of distance on a regular basis.